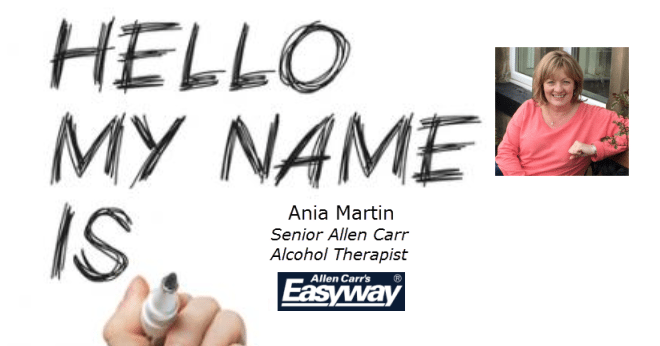 “Over the next few days I didn’t experience any unpleasant alcohol withdrawal symptoms and there really isn’t a word to truly describe the elation of feeling total freedom from alcohol”.

John: Ania can you tell us a little about your drinking history?

Ania: Well, like most drinkers I started drinking alcohol in my teens and for many years I would only consume alcohol as part of a celebration or at social occasions. But as time went on I had to deal with some personal difficulties in my life and I sought comfort and temporary escape in alcohol. I never, in a million years, would have envisaged that I would get to a point when I would consider myself to have a drink problem.

John: What was it that made you decide to attend an Allen Carr’s Easyway to Stop Drinking Centre?

Ania: To cut a long story short, I decided that I didn’t like the way alcohol was affecting me and my life. Having initially read Allen Carr’s alcohol book successfully quit drinking alcohol I became so confident in the method that I made the huge mistake of thinking I could just return to drinking and all I would have to do, once I had had enough again, was to re-read the book.

Well, apart from not wanting to keep re-reading the same book, I soon realised it didn’t quite work like that and as such decided to book myself on one of the ‘Easyway to Stop Drinking’ seminars in Birmingham.

John: Tell us a little about the day you attended the seminar. What was it like? How many people attended it? What was the atmosphere like?

Ania: I arrived at the centre with very mixed feelings of apprehension, a little fear, intrigue and excitement. I didn’t really know what to expect. Although I received a very warm welcome when I arrived – waiting for the seminar to start was a little like waiting for the dentist and I sensed everyone else there was probably experiencing very similar feelings. I consoled myself with the fact that we were all there for the same purpose! I needn’t have worried at all, because the therapist soon put us at ease and once the seminar was underway the atmosphere was very relaxed, informal and even enjoyable.

John: How did you feel afterwards? Did you find it easy to quit drinking?

Ania: To be perfectly honest, I didn’t have any ‘Wow’ moment. In fact, whilst everything the therapist told me made absolute sense, I didn’t really feel any different. But as I’ve already said, having read the book I knew the method worked and so from that perspective I was excited. I decided to go out that evening and actually found myself at times quite fixated by other drinkers, not because I was envious of them, but because I was aware of a new found confidence about being out with friends and enjoying myself without feeling the need to drink alcohol. Over the next few days I didn’t experience any unpleasant alcohol withdrawal symptoms and there really is not a word to describe the elation of feeling total freedom from alcohol.

John: What were the main things you noticed change in your life after you stopped drinking? Were there difficult things? How did friends react to the “new Ania”?

Ania: Crikey there are too many positives to mention. I have already mentioned a couple above and in addition to those, some, if not the biggest changes were; Peace of mind and the increase in time and energy that I had for the people I consider to be the most important in my life. Time, energy and enthusiasm for life in general and activities and hobbies that I’d either stopped doing or missed the opportunity to do. Oh – and SLEEP! I have never slept so well since quitting alcohol. And no hangovers! In fact, the list is endless.

With regards to how my friends reacted, well, as most of my drinking was done whilst I was alone at home, none of my friends really new the extent to which I was drinking, so when I first told them I had quit I did get a few strange reactions. One or two even falling about laughing at the prospect, thinking I was actually joking! However, once they realised I was totally serious, they were fully supportive. I do at times get some strange reactions from people who I meet socially for the first time, when they notice that I don’t drink alcohol, but again they very quickly accept it – it doesn’t cause me a problem.

John: What made you decide to get in touch with Allen Carr’s Easyway to apply for training as an alcohol therapist?

Ania: Well firstly, for selfish reasons as I thought what better and more rewarding a job than to be part of a team that enables people to get their lives’ back. Secondly, having escaped the alcohol trap through Easyway myself, I know that it really does work and is so easy to quit. I was inspired by that and wanted to help. It’s so rewarding being part of something that makes such a huge impact on peoples’ lives.

John: The recruitment process is pretty arduous and the training is really tough. Was it worth it? Tell us a little about how it feels to free people from their alcohol addiction?

Ania: Ha-ha, yes John, you are a pretty hard taskmaster – but I forgive you! The fact that the selection process and the training is so tough really does focus your attention. You do find out whether you really want to be an Allen Carr therapist or not. As tough as it was – the whole process is so absolutely worth it, especially as so many clients get back in touch to tell us about their success and how much their lives have changed for the better.

Knowing that I have played a part in freeing someone from their alcohol addiction gives me tremendous satisfaction and a feeling of fulfilment.

Read more about ‘How to Stop Drinking’