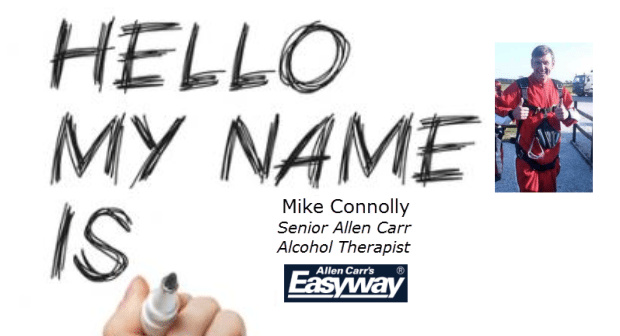 “When I stopped drinking it turned every hour since into a ‘happy hour’ and there is no better feeling than that “.

John: Mike, can you tell us a little about your drinking history?

Mike: I always enjoyed being the life and soul at parties, even being a bit of a party animal. After university, during my working career, marriage and even after starting a family socialising was a big factor. I was always pictured with a glass in my hand. It became part of who I was and I started realise this couldn’t carry on. When I tried to take a break from drinking I found that I thought about it even more and at some point I realised it had to stop.

John: What was it that made you decide to attend an Allen Carr’s Easyway to Stop Drinking Centre?

Mike: I had heard about the success of the quit smoking seminars by friends who had used the service and when I realised there were seminars for quitting drinking alcohol I wanted to know more.

John: Tell us a little about the day you attended the seminar. What was it like? How many people attended it? What was the atmosphere like?

John: How did you feel afterwards? Did you really find it easy to quit drinking?

Mike: It was amazing really. I was still ‘me’ but I couldn’t believe how much more energy I had. I started to sleep better right from the start – more soundly – better rested. It was odd in a way – that night I came home like normal and whereby I would normally head straight from the drinks in the fridge – I simply didn’t feel I needed to. Or even wanted to. It was like a switched had been flicked and I just didn’t want a drink. I honestly couldn’t believe it.

John: What were the main things you noticed change in your life after you stopped drinking? There must have been lots of positive things? Were there difficult things? How did friends react to the “new Mike”?

Mike: Ha-ha – I was still the same old me but I had so much more energy and I also started to anticipate events and situations much more optimistically. Gradually life became so much less stressful than when I was drinking. As I mentioned – I slept better but I also became more focused during the day – more alert and sharper. People who knew me couldn’t believe the difference. I lost 5 stone in weight when I stopped drinking – the weight dropped off me. The stresses and strains of life don’t go away – but I’m more able to deal with them than when I was a drinker. What I didn’t realise is that the real fun in life actually starts when you stop drinking. I’m no longer dictated to by a bottle of booze. I’m in control and it feels great…as a nice bonus – the extra cash I’ve saved has been really handy.

John: What made you decide to get in touch with Allen Carr’s Easyway to apply for training as an alcohol therapist?

Mike: I wanted to understand what had happened because it was so easy to just walk away from alcohol. What was the magic that had made someone like me just stop instantly? I also wanted to spread the word. I felt like I’d stumbled across something special and felt more people needed to know that freedom was within their grasp if only they knew about it. At the time Allen Carr’s Easyway to Stop Drinking seminars were only available in Birmingham and London and I felt a clinic further north was needed and with my new focus and energy I believed that I was capable of taking it on.

John: The Allen Carr recruitment process is pretty arduous and the training is really tough. Was it worth it? Tell us a little about how it feels to free people from their alcohol addiction?

Mike: The process was tough and when my application pack arrived and laid out what was involved in the recruitment process – let alone the training – I thought I’d done the wrong thing. I was so proud to have got through the selection process and as soon as I started my training the support from Allen Carr’s Head Office team therapists was amazing. It really kept me going through those dark times of doing the training.

I knew it would be worth it – but was even more certain when I attended my first Allen Carr conference. Once a year – all the Allen Carr people from all over the world get together in London. At my first conference – before I became qualified – I was totally inspired. Never had I been in room with so many amazing individuals who could all relate to what I was going through. I knew I was in the right place and I wanted to be a part of this amazing story. Being able to help people who cannot see a way out of their addiction because it has such a grip on them – makes this is the best job in the world.

Some clients who attend my seminars have tried every method going from AA to rehab in The Priory – so when they come to me they say that this is their last chance. It’s a heck of a responsibility – but I view it as an absolute privilege. I can’t put into words what it feels like to get the letters and emails that clients send after attending saying how they’re enjoying their freedom and how easy they found it.

There is no magic – it just feels like it. It just works and there is no better feeling than knowing that someone who was so desperate is now free because they spent a few hours with me and Allen Carr.

When I stopped drinking it turned every hour since into a ‘happy hour’ and there is no better feeling than that.

Read more about ‘How to Stop Drinking’