Allen Carr's Easyway“Although I could stop for a couple of months I couldn’t get completely free and for the first time in my life I began to see the link between myself and heavy life-long smokers. That terrified me!“
Share this page

“Although I could stop for a couple of months I couldn’t get completely free and for the first time in my life I began to see the link between myself and heavy life-long smokers. That terrified me!“ 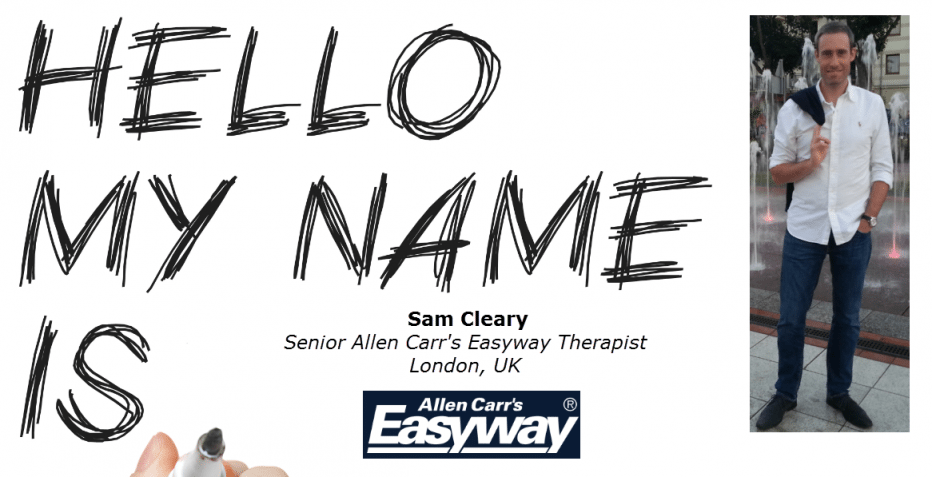 “Although I could stop for a couple of months I couldn’t get completely free and for the first time in my life I began to see the link between myself and heavy life-long smokers. That terrified me!“

John: How did you come to start smoking Sam?

Sam: I started smoking when I was 14 and once I got a job at 16 I was up to smoking a packet of 20 a day. The amount I smoked gradually increased over the years and I was up to about 40 a day before I finally escaped from the trap aged 28.

Before I became hooked on nicotine I had been a keen runner and was undefeated at the 1500m and cross country in my year group but after a year or so of smoking my fitness levels were badly affected.

I remember the day I signalled to the school that I wasn’t prepared the to run the 1500m for the team anymore. I went from running in it in under 5 minutes, to jogging around in over 7 minutes in an inter-school athletics match. I remember one of my team mates shouting to me from outside the track as I jogged around “I thought you were supposed to be good!”

That really stuck with me as I was good before and it was the one thing that I was the best in my school year at. But smoking had robbed me of my fitness and desire to compete and so I threw in the towel.

John: How did you hear about Allen Carr’s Easyway?

Sam: I first heard about Allen Carr’s method from my Mum who recommended the ‘Only way to stop smoking book’, but I ignored the advice at the time as I was of the mind that if it wasn’t available on the NHS it wasn’t proper advice and so it should be ignored, so in my attempts to quit I persevered with nicotine patches and gum.

I thought stopping smoking was easy as I’d done it loads of times, 2 to 3 months at a time. It wasn’t until I was in my mid-twenties that it suddenly dawned on me that stopping wasn’t as easy as I thought. Although I could stop for a couple of months I couldn’t get completely free and for the first time I began to see the link between myself and heavy life-long smokers which terrified me.

I also began to get an appreciation of the horrible panic feeling of running low on cigarettes at night and I found that I could no longer stop for the 2 to 3 month periods using nicotine patches and gum anymore.

So that’s when I finally heeded my Mum’s advice and read the book. Unfortunately, I ‘d been scared to death by the link between myself and the life-long smokers and so I was a bit too desperate for it to work for me and so despite a few attempts to read the book, my panic feeling just couldn’t be alleviated.

So in the end I signed up for a seminar at the London centre – and luckily the Allen Carr’s Easyway therapist that I saw managed to instil enough calm in me for me to fully absorb the message and now 4 years later I’m still so thankful.

John: How did you get involved in the organisation?

Sam: The biggest impact it had on me, was just the wonderful sense freedom from that horrible panic feeling and I began to use the method to overcome the other addictions that I had; starting with alcohol, then refined sugar, aspartame and caffeine.

Given the huge impact it had on my life and my success in applying the method to overcoming other addictions I was confident that I would have the passion and understanding to help others get free and experience the same wonderful sense of freedom. So I decided to apply to become a therapist. I went through the course of 3 interviews, and after a really demanding recruitment process I was accepted to begin training to become a therapist.

The training period was tough as the writing of my session notes and then the learning and practicing of the 5 hour 1st session took a large time commitment on top of working full-time as a Structural Engineer.

I became increasingly nervous as I neared the end of my training as it began to dawn on me that I would soon be sitting in front of a group with the responsibility of helping people on my shoulders. But I observed a couple of sessions delivered by other therapists before my first session which I learned a lot from and that helped my first few sessions to go smoothly.

John: How does it feel to be an Allen Carr therapist?

Sam: It’s got to be the most satisfying job in the world! I love seeing the transformation in people going from a state of suppressed panic and fear at the start to seeing an excited, relaxed confidence in them by the end. It’s wonderful to see and I love taking people through that process. It gives me a lot of satisfaction to be part of an organisation that makes such a difference to people’s lives. I consider myself lucky to be part of something so special.