Allen Carr's Easyway“I honestly thought I loved it. It was like my best friend. My precious. Everything I did revolved around smoking. Where I went, who I went with, when I left, the mood I was in.”
Share this page

“I honestly thought I loved it. It was like my best friend. My precious. Everything I did revolved around smoking. Where I went, who I went with, when I left, the mood I was in.” 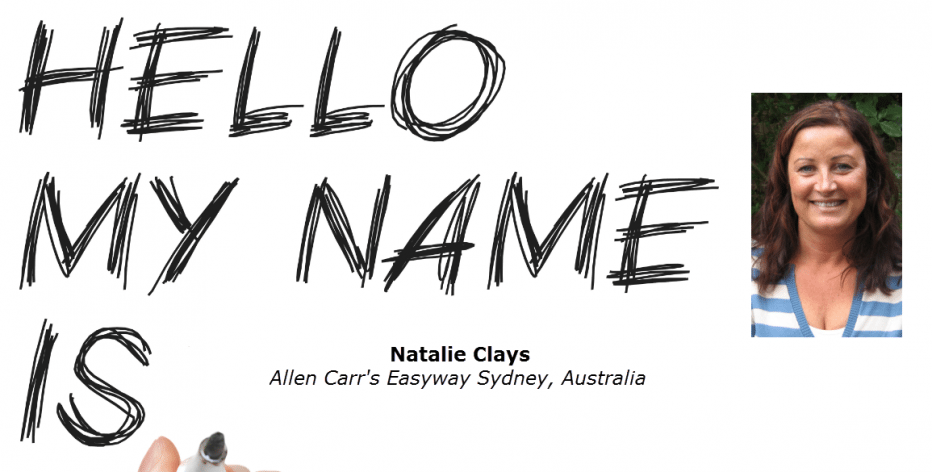 “I honestly thought I loved it. It was like my best friend. My precious. Everything I did revolved around smoking. Where I went, who I went with, when I left, the mood I was in.”

John: Tell me how you started smoking?

Natalie: There I was, fifteen years old, hiding in the bushes at school about to try my first cigarette. It was naughty, it was cool, it was grown up, it was rebellious – it felt so exciting!

Only it wasn’t. It tasted disgusting, made me cough and I almost threw up. Ugh, what was all the fuss about? I thought maybe I wasn’t doing it properly…so I persevered.

And so began my twenty-year love/hate affair with cigarettes.

It started out as one a day at lunchtime bought with my lunch money or stolen from my Dad’s packet (yep, smoking made me dishonest), but soon crept up to an extra one here and there. One became two became five became ten and before I knew it I was on a pack a day.

I honestly thought I loved it. It was like my best friend. My precious. Everything I did revolved around smoking. Where I went, who I went with, when I left, the mood I was in.

John: Did you make many attempts to quit smoking? When did you realise you had a real problem?

Natalie: I remember going on a first date with a guy I’d liked for ages. He didn’t know I was a smoker. The dishonest part of me had lied about that. We had a wonderful evening, I was completely besotted…and then made my excuses to leave early so that I could sneak in a crafty fag.

It was a real wake up call. I’d put a cigarette before a possible relationship. Okay, time to quit.

I tried everything to quit.

I tried patches maybe a dozen times; but a patch became something I’d wear when I wasn’t allowed to smoke, like on a flight for example. As soon as we landed it was torn off and a cancer stick shoved in my mouth. Or sometimes I’d even smoke whilst wearing a patch, just to get a double hit.

I went to see a hypnotherapist (actually I went to see three – I was desperate) and every single time I’d walk out feeling positive and then light up a few hours later.

I tried nicotine gum, inhalers, needles, lasers, lozenges, herbal cigarettes and some crazy tablets that made me feel even more depressed, but nothing helped me to stop. Every time I tried to quit I just felt so empty and couldn’t stop thinking about smoking. I decided that I’d prefer to be a smoker and happy, rather than miserable and deprived and not allowed to smoke.

John: So how did you hear about Allen Carr’s Easyway?

Natalie: A friend told me about Allen Carr’s Easyway. She said “It’s amazing,”, as I puffed away in front of her, envying her ability to drink a glass of wine without it bothering her that she wasn’t smoking. I had tried everything else, what did I have to lose?

I was very nervous when I arrived at the seminar on 21st June 2003. What if it doesn’t work? Will I be one of their failures? What if it does work? I’ll never be able to smoke again!!

Five hours later I walked out feeling…feeling…I didn’t know how I felt. Some of the others in my group that day had an epiphany, but I didn’t. I didn’t really feel any different.

So I waited to see what would happen next; but nothing happened. No epiphany, no light bulb moment, no elation – but equally, no cravings, no awful withdrawals, no anxiety and most importantly, no cigarettes. I just wasn’t a smoker anymore. And it truly was that easy.

The days, weeks and then months went by and still no cigarettes. I still thought about smoking, but rather than in the desperate, longing way that it used to be, now it was in a “Oh yeah, I used to do that” indifferent kind of way. I just wasn’t bothered.

Actually if I’m really honest, I felt sorry for smokers. I could see the panic in their eyes if they were running low on cigarettes and hear them making the same excuses that I used to make. Looking tired and grey, coughing and wheezing, but worse than that was the mental anguish; the worry, the anxiety, the stress, the guilt. The control the drug had over them. Phew, thank goodness that wasn’t me anymore.

John: How did you come to join the organisation?

Natalie: Three months after attending my seminar with zero smokes and virtually no cravings, I contacted the Allen Carr therapist who had saved my life. It had been so easy for me to quit this way that I wanted to get involved and share Allen Carr’s message.

On 2nd July 2005, after a long and arduous slog of recruitment and training, I ran my very first Allen Carr’s Easyway seminar as a therapist.

Nervous and apprehensive at the start…but five hours later my first recruits and I left feeling relieved and exhilarated.

John: How have you enjoyed being an Allen Carr Therapist?

Apart from my Allen Carr colleagues I’m the only person I know who looks forward to going to work on a Monday morning. I would honestly carry on doing the same job even if I won the lottery.
I’m as excited and enthusiastic about my work eleven years later as I was on day one.

It’s awesome being an Allen Carr’s Easyway to Stop Smoking therapist and every day I’m grateful that I was set free of smoking and am able to help others to freedom myself.