The Joys of Smoking According to “The Economist” 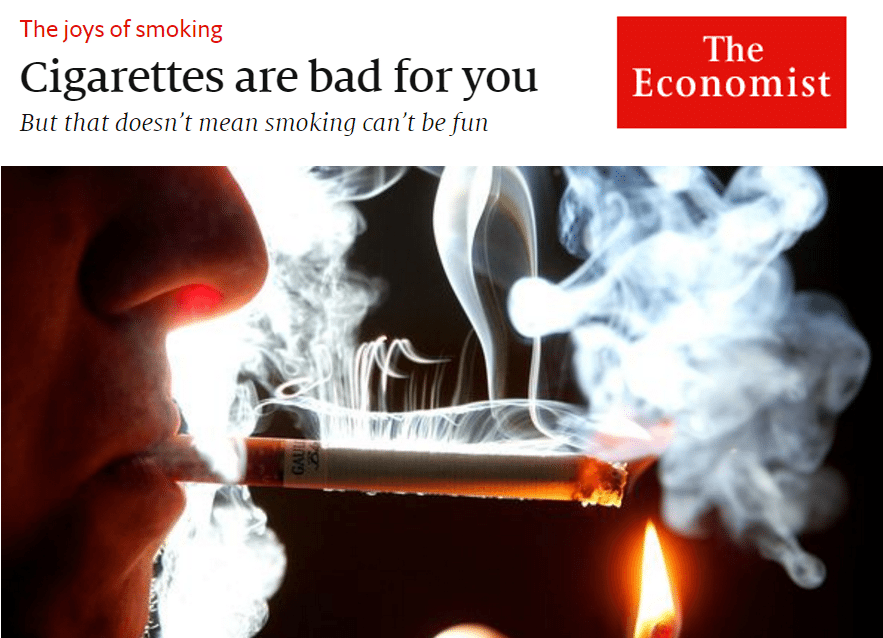 The Joys of Smoking According to “The Economist”

It’s extraordinary to see a publication like “The Economist” printing what is effectively – a love letter to smoking. Merely the title is enough to have anyone who understands nicotine addiction step back in horror. It declares “The joys of smoking – Cigarettes are bad for you – But that doesn’t mean smoking can’t be fun”

The article (published January 21st) which reviews Gregor Hens book “Nicotine” contains several fundamental errors, some of which are harmful.

Firstly, the title. There is nothing “fun” about smoking. Even most smokers will tell you that they hate being a smoker, would love to quit and have made several attempts to do so.

Secondly, you say “The physiological addiction can be overcome with patches…”. While it’s true that the physical withdrawal from nicotine is very slight and goes after a few days’ abstinence, it cannot possibly be overcome by putting nicotine into the body via patches or any other mode of nicotine delivery which clearly feeds the addiction and prolongs withdrawal.

Thirdly, your claim “the truth is that every ex-smoker is and always will be a smoker” is perhaps the most damaging falsity. Along with the “fun” in your title and the absurd claims for the benefits of smoking (there is not one) in Hens’s book, “Nicotine”, which you repeat, it suggests that every ex-smoker is in some way still a slave to the addiction; that freedom is impossible. Robin Hayley, Chairman of Allen Carr’s Easyway, attended the launch of “Nicotine” where Will Self claimed that the drug has psychoactive and psychotropic effects. When Robin challenged him to explain what these were, he predictably launched into a diatribe which neither Robin, I, nor anyone else could possibly have understood. Even on second and third listening – the event was recorded and put on line – it was clear he was talking nonsense.

There is, tellingly, no word in the English language to describe the “high” of nicotine. When people take alcohol, they become “drunk”, “tipsy”, or “sloshed”, with cocaine they become “coked up”, with marijuana the word is “stoned”, LSD “tripping”, and so on. However, have you ever heard of anyone saying they’re “really nicotined up”? There’s no law against driving on nicotine because the only mood alteration from the drug is the slight empty, insecure feeling of withdrawal which prompts the lighting of the next cigarette, and the mental agitation caused by the smoker feeling deprived when they aren’t able to smoke.

People who use Allen Carr’s Easyway to Stop Smoking benefit from the fact that the method frees the smoker from the illusion that smoking conveys any advantages whatsoever and therefore removes the desire to smoke. The method destroys the illusion that stopping smoking involves making a sacrifice and therefore there is no feeling of deprivation. It is feeling deprived that makes it difficult for smokers to quit when they use other methods because they fail to dispel those illusions. The Economist has done a great disservice to its readers by further propagating them.

Read The Economist’s review of “Nicotine” by Gregor Hans