The idea of electronic cigarettes has been around since a patent was granted in the US for such a device in 1930. However, it was not until 2003 that the first commercial device was created in Beijing by a pharmacist.

Since that date more products have been created, from vaping to heat not burn devices, encouraging people to move from traditional tobacco products to the new “safer” devices as well as encouraging people to use them who do not smoke. These are now often called Electronic Nicotine Delivery Systems (ENDS) and Electronic Non-Nicotine Delivery Systems (ENNDS).

This page will discuss facts & statistics regarding vaping usage to give you additional information to help you to quit vaping. Just click on the link below to go to the section your are interested in:

How popular is vaping?

Global vaping or e-cigarette use and sales have risen dramatically since 20111.

Number of global vapers in millions

Is vaping safe? – 5 Vaping health facts you should know:

1. Vaping is less harmful than smoking but it’s still not safe

It is likely that vaping is less harmful than smoking but it is definitely not harmless. Some people have compared vaping instead of smoking as being like falling from the 10th floor of a building rather than the 20th floor. There is some integrity to this comparison although it’s not a simple consideration.

The World Health Organisation13 has also cited many concerns regarding vaping:

In January 2018, the National Academies of Science, Engineering and Medicine released a consensus study report that reviewed over 800 different studies and concluded that ENDS /e-cigarettes / vaping causes health risks18.

2. Vaping is bad for your heart and lungs

The American Lung Association has stated that the inhalation of harmful chemicals [from vaping] can cause irreversible lung damage and lung disease24.

Vaping liquid contains over 80 chemicals including nicotine, cancer-causing chemicals and toxic heavy metals such as nickel, tin and lead7 all of which are associated with developing lung disease.

When heated the vaping liquid creates ultrafine particles and volatile organic compounds. These can exacerbate conditions such as asthma and emphysema and could lead to a heart attack11, 12.

Popcorn Lung  – A chemical called diacetyl, which although banned in the UK & EU is available in juices worldwide including in US and online, is used to create a buttery flavour such as used in popcorn, custard and sweet dessert flavours. High levels of exposure to diacetyl can lead to the serious lung disease bronchiolitis obliterans also known as “popcorn lung”10.

EVALI/VAPI – E-cigarette Vaping product use Associated Long Injury (EVALI) is an acute or subacute respiratory illness with damage to the lungs that can be severe and life-threatening20, 21, 22. As of 18 February 2020 there were almost 3,000 hospitalised cases or deaths due to EVALI in US23 most of whom were under 35 years old.

3. E-cigarettes are just as addictive as traditional cigarettes

E-cigarettes very often contain nicotine and even the juices that say they do not contain nicotine often do30. Furthermore, vaping is often a gateway to the nicotine variety and to smoking (the World Health Organisation estimates that for young people it more than doubles the likelihood of smoking in the future)29. In fact, 99% of the e-cigarettes sold in the USA contained nicotine5 and according to JUUL’s website the nicotine content of one JUUL pod is equivalent to one packet of cigarettes.

In fact e-cigarette users uptake of nicotine can be more than that of smoking because of the concentration of the juice, the power of the device, the ingredients in the juice and the puffing style of the user31. Furthermore, juice manufactures have developed new mixtures that deliver higher levels of nicotine to the user while masking it’s harshness enabling users to have more nicotine32.

Nicotine is a highly addictive substance and in fact it has been reported to be harder to quit than cocaine.

Vaping is therefore addictive due to nicotine just like cigarettes. Given that addicts are capable of increasing the dose of nicotine content – it is likely to be even more so.

Read full article – Is Vaping harder to quit than cigarettes?

Vaping may be less harmful than smoking but it’s still not safe.

The US Surgeon General’s Report on Cessation concluded, “The evidence is inadequate to infer that e-cigarettes, in general, increase smoking cessation”36.

Furthermore, there is research that suggests that, in some cases, ENDS / vaping could hinder cessation in some individuals by prolonging or increasing addiction to nicotine38.

All the above has led the World Health Organisation to say “ENDS / vaping cannot be recommended as cessation aids” instead it recommends methods with randomised controlled trials that enable smokers to quit nicotine completely29. This is also the advice given by the US Centres for Disease Control and Prevention7.

The World Health Organisation goes on to say that “Randomized controlled trials show that there are proven ways for drug free smoking cessation, for example, intensive behavioural support with individual or group counselling [such as Allen Carr’s Easyway] is one of the effective interventions.”

5. A new generation is getting hooked on nicotine

In 2019, 9% of 13-14 year olds had vaped nicotine; in 2017 it was only 3.5%4. The rapid rise in young vapers  is driven by the slick advertising projecting vaping as sexy, attractive and safe, (reminiscent of smoking adverts of a bygone era) and by the flavours that appeal to young people1. They also don’t realise there is nicotine in the vaping juice5. The use of the word “juice” is a deliberate choice on the part of the manufacturers – the implication is that the liquid is healthy rather than poisonous and addictive.

In addition a number of adults who have never smoked are now vaping, and smokers are combining vaping & smoking, drawn in by the same adverts in the belief that there is a health benefit from reducing their smoking, or that it is just a bit of fun with no harmful effects to vaping. However, vaping liquid contains over 80 chemicals including nicotine, cancer-causing chemicals and toxic heavy metals such as nickel, tin and lead7. When heated the vaping liquid creates ultrafine particles and volatile organic compounds. These can exacerbate conditions such as asthma and emphysema and could lead to a heart attack11, 12. Vaping is less harmful than smoking (but it’s still not safe).

It is worth noting that the single biggest factor to stop teens starting to vape appears to be to raise children in a smoke and vape free home. If the parents smoke or vape it normalises the behaviour in children who particularly when they are young look up to parents as their role models. This increases the likelihood that the child will be taken in by the advertising and go on to vape and smoke25.

The numbers, particularly amongst the young, show the risk that a new generation is getting hooked on nicotine. 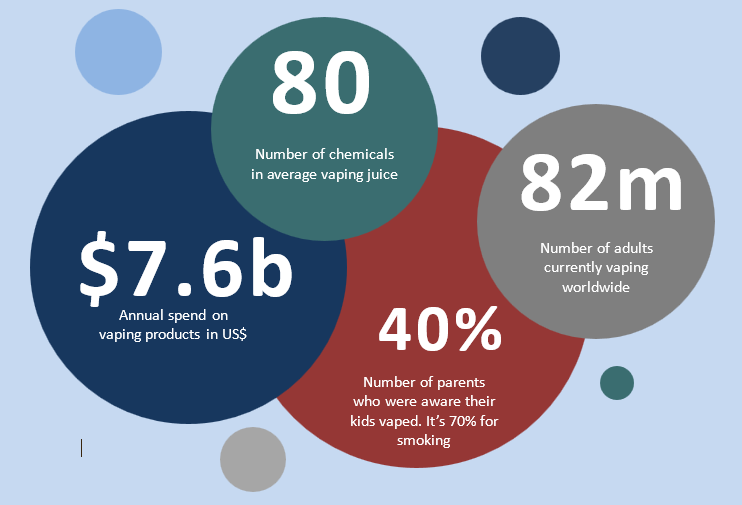 Vaping statistics in the UK

UK vaping or e-cigarette use and sales have risen dramatically since 2012.

Number of UK vapers in millions

Vaping statistics in the US

US vaping or e-cigarette use and sales have risen dramatically since 2012. The graph below shows the growth in teens:

Vaping statistics vary by country due to the policies and controls in place by the various governments.

Age Profile of US Vapers who vaped in the last week 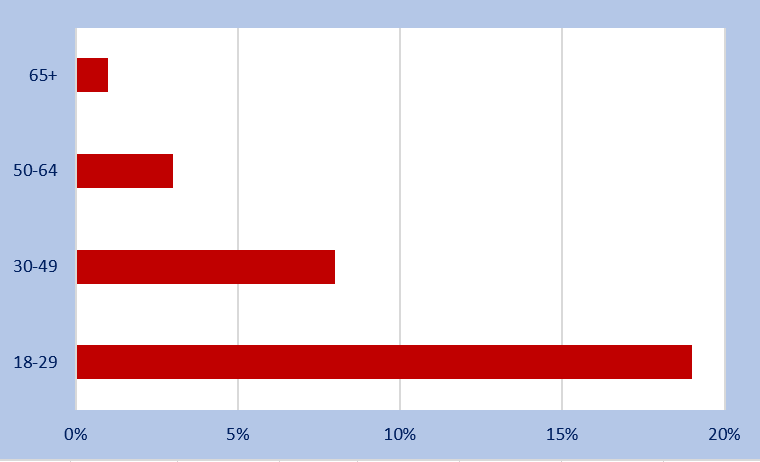 Age Profile of UK Vapers who vaped in the last week 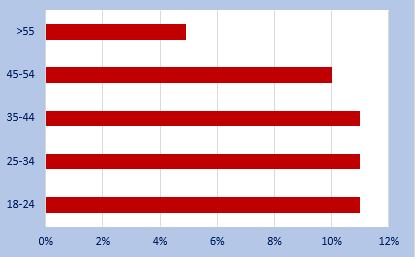 The graphs show clearly that in the US most vapers are young people whereas in the UK it is mainly more evenly distributed but with youth vaping on the increase. The reason for the difference is the strong push in the UK by the authorities to promote vaping as a means of stopping smoking and restrictions on advertising and marketing of vaping.

Health risks exist for vaping and more research is on-going into this area. In the US the authorities make it clear that vaping is not harmless and can contain harmful and potentially harmful substances5. 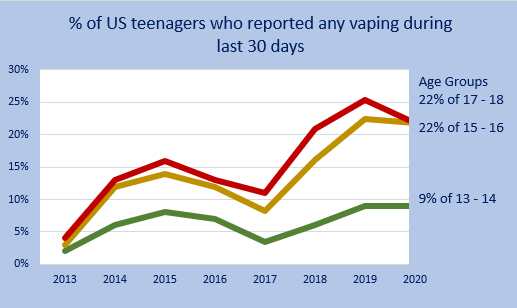 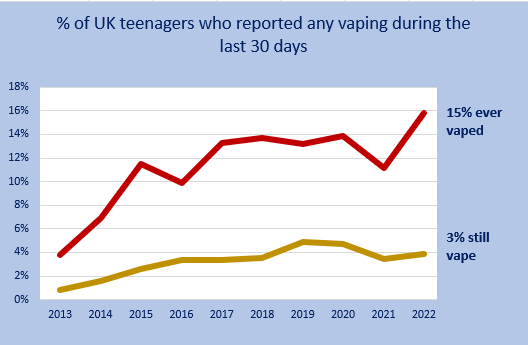 There has clearly been a rapid increase in the number of teens. The marketing aimed to encourage them to start vaping coupled with flavours that appeal to them has lead to this increase. Most teens are unaware that electronic cigarettes contain nicotine[9] or of the health dangers they pose. For more information about teen vaping click the button below:

The number of people using E-cigarettes has grown dramatically over the last few years many unaware that the vaping liquid contains harmful chemicals including nicotine. The marketing makes it look sexy, fun and safe when the reality is that the products are addictive and can be damaging to health. A new generation is now becoming addicted to nicotine. You may be interested in these articles: